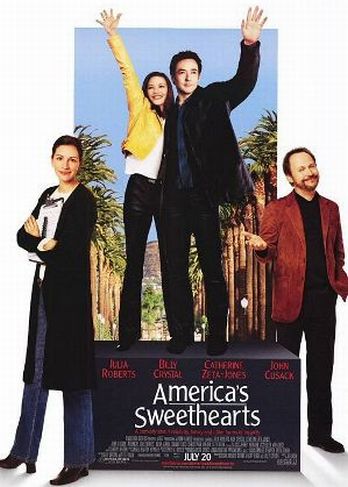 The real story is happening off screen.
Advertisement:

Once upon a time, Eddie Thomas (Cusack) and Gwen Harris (Jones) were the Hollywood Golden Couple. They starred in several schlocky but profitable romantic movies that propelled them to superstardom. They were America’s Sweethearts…

Until Gwen split... and took her new beau, Hector (Hank Azaria), with her. The breakup caused Eddie to have a nervous breakdown and retreat to a wellness center in the mountains, where he’s been hiding from the outside world for a year.

Meanwhile, in a studio in the same town, Hollywood Executive David Kingman (Stanley Tucci) has called Lee Phillips (Crystal), Eddie and Gwen’s recently-fired publicist, to view the stars’ last film. The problem, and it’s a biggie, is the eccentric director, Hal Weidmann (Christopher Walken), hasn’t sent it. And he’s not going to... at least not until the press junket. David promises Lee his job back if he can salvage this mess. Step number one: Reunite Eddie and Gwen, at least briefly, for the junket and distract the press from the missing movie by making them believe the once-hot duo might get back together. To do this, he’ll recruit Gwen’s much-put-upon sister and assistant, Kiki (Roberts).

From there on it’s wooing the press, interview after interview, scandals involving cacti, dodging questions about a film no one’s seen, and Hector unexpectedly showing up.

And then there’s Kiki and her own feelings for Eddie. And those feelings could be mutual... if only he could stop obsessing over Gwen.