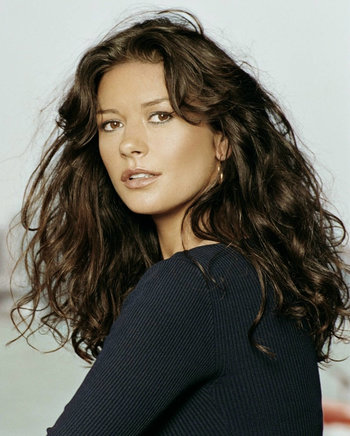 "I remember growing up knowing I wanted to be on the stage. I wanted to get to London as soon as possible and start auditioning for theater."
Advertisement:

She first made a name for herself in the early 1990s when she starred in the Yorkshire Television Dramedy series The Darling Buds Of May. The series was a success and made her one of the United Kingdom's most popular television actors, but she was dismayed that it led to her being Typecast as the token pretty girl in British media and relocated to Los Angeles, believing that the anonymity she would have in America could help her get roles on merit and not due to her public image.

In 1996 she starred on the CBS miniseries Titanic, which got her the attention of Steven Spielberg who recommended her to Martin Campbell who was then directing The Mask of Zorro. Campbell cast her as the leading lady Elena Montero which was a big success and launched her Hollywood career.

She is married to Michael Douglas with whom she has a son and a daughter.

Tropes in Catherine Zeta-Jones's works include: