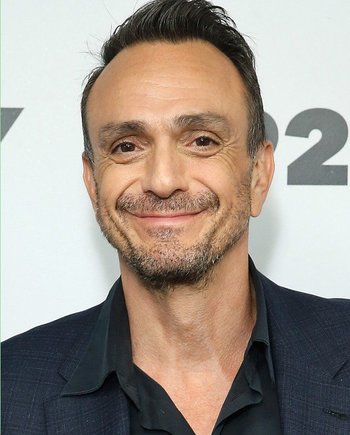 Henry Albert "Hank" Azaria (born April 25, 1964) is an American actor and comedian. Ever since 1990, he has voiced many secondary characters from The Simpsons, (the Curtain Call at the end of The Simpsons Movie credits him for more characters than any of the other actors, with a whopping ten roles!) and has done several other notable roles.

Much like Dan Castellaneta and Harry Shearer, Azaria voices a lot of male characters that aren't voiced by other voice actors (like Phil Hartman, Karl Weidergott, Chris Edgerly, or any of the female voice actors who play boy characters) or a celebrity guest star. From The Simpsons alone, he notably voices: miserable, suicidal, Jerkass bartender Moe Szyslak; Surfer Dude career criminal Snake Jailbird; fat, incompetent town cop Chief Clancy Wiggum; Asian (Indian) Kwik-E-Mart clerk Apu Nahasapeemapetilonnote until 2020; the "Sarcastic Middle Aged Clerk" who sounds like Charles Bronson (his real name is said to be Raphael, according to the season 12 episode "Day of the Jackanapes"); smug, fat nerd/Android Dungeon store owner Jeff Albertson (better known as Comic Book Guy)note his Bordertown character, Bud Buckwald, sounds like a dumber, less smug version of him; Milhouse's loser father, Kirk van Houten; Duff Beer's macho mascot, Duffman; Homer's Token Black friend, Carl Carlsonnote until season 32, when he was replaced by Alex Desert due to the aforementioned controversy over white voice actors playing non-white characters; the replacement voice for Akira, the Japanese sushi restauranteur and, in season three's "When Flanders Failed," a karate teachernote George Takei was originally the voice of Akira on his premiere episode "One Fish, Two Fish, Blowfish, Blue Fish" — the season two episode where Homer fears he's going to die after eating Japanese blowfish that may not have been cut properly and many more minor instances.

He also voiced Edward Brock/Venom in Spider-Man: The Animated Series, Bartok the bat in Anastasia, and Harold Zoid in Futuramanote Dr. Zoidberg's washed-up uncle and silent hologram star, using his "Old Jewish Man" voice from The Simpsons, and Bud Buckwall on Bordertown.

On the side of live action appearances, Azaria's has performed in more diverse roles, which include:

Both in appearance and through his seemingly endless repertoire of exotic accents, he's Ambiguously Brown. He is actually an American Sephardic Jew (Sephardic Jews are the ones who can trace their ancestry from the Iberian peninsula [the peninsula containing Spain and Portugal] to the north part of Africa. Contrast that with Ashkenazi Jews, whose lineage is in Central and Eastern Europe).