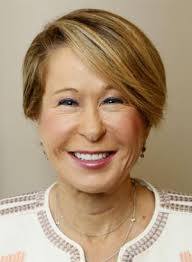 Martha Maria Yeardley Smith (born July 3, 1964 in Paris, France) is an American actress best known for voicing Lisa Simpson (the saxophone-playing, intellectual daughternote though the Tracy Ullman Show shorts and some of the earlier episodes had Lisa as a troublemaker just like her brother) on The Simpsons since its inception as a series of shorts on The Tracey Ullman Show. She is the only main cast member on the show who does not voice multiple characters, though in such episodes as "Missionary Impossible" and "Last Tap Dance in Springfield", she voices female characters who are in some way like Lisa: the former episode had Smith voice a Pacific Islander girl that Homer calls "Lisa Jr." while the latter episode had Smith voice a bookish Spanish woman in a movie Lisa watchesnote Also, Yeardley Smith voiced the Irish housewife who had a crush on Mike Farrell in the season four episode, "Lisa's First Word", in the scene of Marge talking to an Italian housewife and an Irish housewife about the last episode of M*A*S*H. Smith can also be heard in certain scenes of The Simpsons that feature crowd walla. And fun fact: originally, Yeardley Smith was going to voice Bart while Nancy Cartwright was going to voice Lisa.

Prior to The Simpsons, she was a regular on the sitcom Brothers. She has also been a regular on Herman's Head (which she and fellow Simpsons voice actor Hank Azaria consider an Old Shame) and had recurring roles on Dharma & Greg, Dead Like Me, Phil of the Future and The Mindy Project. Her films include Heaven Help Us, Maximum Overdrive, City Slickers, Toys and As Good as It Gets.