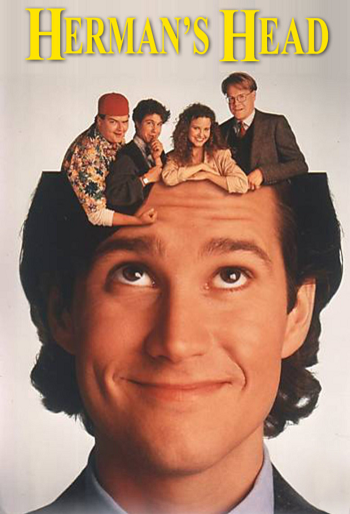 Originally broadcast on Fox (1991-1994), this half-hour Sitcom would have been just an ordinary office-based comedy - except for its use of one of the most imaginative devices ever tried on broadcast television: the viewers were allowed to see the inner workings of the title character's mind. The inside of Herman Brooks' (William Ragsdale) head was presented as an attic in which dwelt the Insiders: four characters representing the conflicting forces which drove Herman's personality: Angel (Herman's sense of selflessness, charity, and justice), Animal (Herman's desire for sensate pleasures, such as food, sleep, and sex), Genius (Herman's storehouse of knowledge and wisdom), and Wimp (Herman's sense of fear and apprehension).

Outside of the "attic", Herman is a young writer working as a fact-checker for a Manhattan magazine, with a typical assortment of supporting characters: His boss Mr. Bracken, a walking encyclopedia, but iffy on personal skills; Louise, a meek-but-sweet plain-jane (played by Yeardley Smith, best known as the voice of Lisa Simpson); and Heddy, a man-hungry social-climbing beauty for whom Herman intermittently pines for. Playing counterpoint to the office crew is Herman's best friend Jay (Hank Azaria, also better known for his many roles on The Simpsons), a part-time Lothario whose success at writing drives Herman to match him.

Each episode mated a typical sitcom situation with the unique perspective on Herman's choices and motivations afforded by the "Inside" scenes. The conflicts, alliances and negotiations between the four Insiders made for just as much comedy as the events in the "outside" world — and sometimes more, as in the episode where the constantly-warring Angel and Animal discovered a woman they both agreed on.

The show was canceled after its third season.