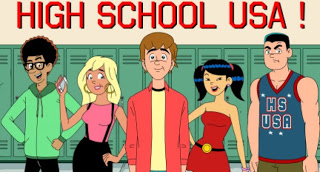 High School USA! (not to be confused with the 1983 made-for-TV movie High School U.S.A.) was an animated show that aired on ADHD (Animation Domination High-Def)note Animation Domination High-Def is a Saturday line-up of adult animation made as a competitor not only to Saturday Night Live (since MADtv ended in 2009 and FOX went through a string of failed late-night talk shows between 2009 and 2011), but to Adult Swim's Saturday line-up cartoons added to the Fox network along with Axe Cop. The series comes from Adult Swim fixture and one-time Greendale Community College student Dino Stamatopoulos.

The series follows a group of super-positive millennial students through school. They confront all the unique challenges of growing up in a modern world. Led by the painfully naïve and always upbeat Marsh Merriwether, there is nothing these kids can’t put a positive spin on, from cyber-bullying to Adderall addiction to embarrassing sexting incidents.

The series lasted one season, consisting of 12 episodes, before getting cancelled.

You can watch it for free here.