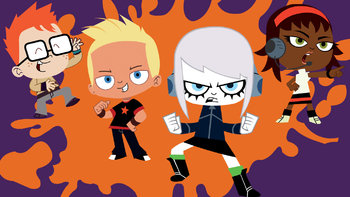 Welcome to Pinkerton Academy, a experimental boarding-school built in the middle of a park. It has only two teachers, 32 students, a computer-operated kitchen that prepares all your favorite foods and makes them nutritionally balanced, and a main classroom with glass-domed walls and a tree growing through it. Surely this would be a paradise, except for one minor problem.

Meet your teacher, Miss Sadie McBeth, a rather psychotic 20-something witch who has made it her mission in life to control, enslave and basically torture kids any way she can... If Miss McBeth had her way, Pinkerton would have been transformed into a totalitarian hell-hole long ago.

Fortunately, there's one thing that keeps getting in her way: the Invisible Network of Kids. These four Pinkerton students joined forces and formed a spy organization dedicated to blocking, subverting and basically just driving Miss McBeth even crazier than she already is. These for kids are the only thing standing in the way of McBeth and total domination of the school. And these intrepid heroes are...

I.N.K. Invisible Network of Kidsnote Known as Mission : Invisible ! in France is a French animated series produced by Samka Productions that premiered in 2010 on France 3 and Gulli. It was a Short-Runner that lasted for just one season and 26 episodes, and flew under the radar in the US; but still gained an English dub and was dubbed in many other languages.

The distribution rights for the series are now in the hands of Jetpack Distribution.