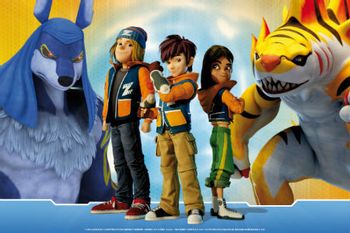 Totally not Digimon
Invizimals is a 2012 animated series from Spain, based on the Invizimals video game. It has a few differences from the game's story.
Advertisement:

In the show, a secret scientific project recruits three kids to explore another dimension inhabited by creatures called "Invizimals." One of the kids, Hiro, has the ability to duplicate the forms of Invizimals if he can obtain their crystals. It turns out that the dimension is being invaded by mechanical beings called X-Tractors, so the kids end up helping the Invizimals defend their world.