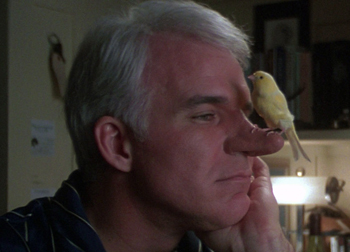 Why the long face?
My nose is big! Uh-uh, I'm not ashamed!
Big like a pickle, I'm still getting paid!
I get laid by the ladies, who know I'm in charge
Both how I'm livin' and my nose is large!
— Digital Underground. "The Humpty Dance"
Advertisement:

Exactly What It Says on the Tin: A weird and funny-looking nose. May or may not be detachable — who nose? Almost always symbolic of the character's personality. The most common shape for these noses is to either be extremely long and narrow like a stick, big and round like a clown nose, or the more realistic right-triangle nose. It can also have a different color (Most commonly red and pink) than the face does. Compare the Sinister Schnoz, which is a villain having a long nose.

May or may not coincide with The Nose Knows if said nose is actually useful. Not to be confused with a Pinocchio Nose, the visible tic that gives away when someone is lying, although Pinocchio's nose is an example of both tropes.