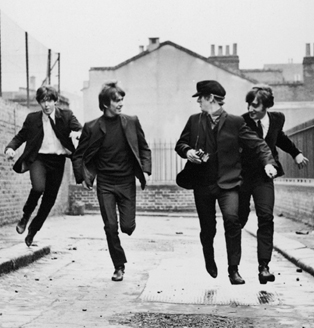 Ah, the almost-innocent joys of youth...
Reporter: Are you a mod or a rocker?
Ringo: Uh, no, I'm a mocker.
Advertisement:

The first film starring The Beatles. It provided clear caricatures of the members of the band — not ideal, but better than the Band Toons. And it helped fuel the phenomenon it showed on-screen.

Released at the pinnacle of Beatlemania in 1964, the film has many innovations in cinematography (notably the invention of the hand held camera shot and its use of the birds eye view shots during the "Can't Buy Me Love" sequence).

It was directed by Richard Lester, who did a lot of surreal comedy (he'd previously worked on film adaptations of The Goon Show), some of which is seen in this film. Paul's grandfather was played by Wilfrid Brambell, a veteran of British TV of the era. The screenwriter was Alun Owen, who spent a week with the group to write the right script, and was nominated for an Academy Award. If you'd like to find out what's scripted and what's improvised, his original screenplay has been published and is still in print.

The Beatles later did four more movies: Help!, Magical Mystery Tour (though that one ended up a Made-for-TV Movie), the cartoon Yellow Submarine (although it was more a case of Not Quite Starring), and the actual documentary Let It Be.

This film's Cult Soundtrack has also been praised as one of the band's best. The album cover has become iconic and songs like "A Hard Day's Night," "And I Love Her," and "Can't Buy Me Love" became Top 5 hits. "Things We Said Today" has also gained classic status over the decades. The soundtrack album has its own entry.