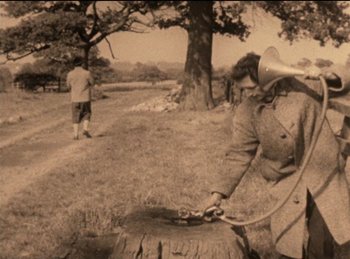 The Running Jumping & Standing Still Film is a 1959 short film co-directed by Richard Lester and Peter Sellers. The cast included Lester, Sellers, and Sellers's partner from The Goon Show, Spike Milligan, who also co-wrote the script.

Sellers, who was branching out from The Goon Show with parts in television and moviesnote In 1956, when commercial TV was only a few months old in Britain, Lester had directed a number of sketch shows starring Sellers and Milligan , came up with the idea to make his own short film. The film was shot over two consecutive Sundays and edited by Sellers and Lester in Sellers' house. It has no story but is a series of surreal comic short pieces featuring a group of wacky characters running around in a field and doing silly things.

Although it was originally made basically on a lark, it was entered in film festivals and won awards, and proved surprisingly influential. The "wacky goofballs in a field" look bears obvious similarities to the later Monty Python's Flying Circus. Also, this film made Richard Lester known to The Beatles—John Lennon saw it—and got Lester the job of directing The Beatles in A Hard Day's Night. Two members of the supporting cast of The Running Jumping & Standing Still Film, Norman Rossington and Leo McKern, went on to appear in the Beatles films directed by Lester.