Film / The Harder They Come 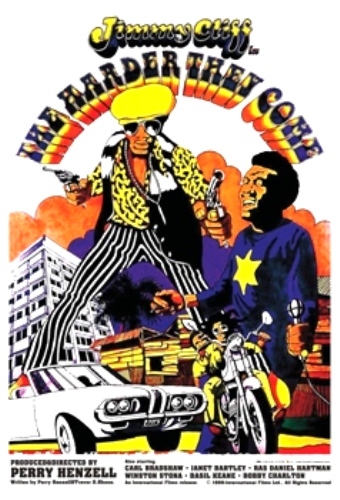 The Harder They Come is a 1972 film directed by Perry Henzell. It was the first feature film ever produced in Jamaica. A massive hit in its home country, it also managed to become a Cult Classic in the rest of the world. In the United States it was marketed on the midnight movie circuit as something of an exotic Blaxploitation movie, featuring lots of Reggae music, a genre that was beginning to attract an audience outside of Jamaica. While technically an English-language film, subtitles were required to help audiences understand the local Jamaican patois. It was successful enough to be included in Danny Peary's first volume of Cult Movies in 1981.

Ivanhoe Martin moves from the Jamaican countryside to the capital city of Kingston. Jobless and poor, he joins the choir of a church run by a temperamental preacher, and begins a relationship with Elsa, a young woman for whom the preacher is a guardian. He first runs afoul of the law after slashing a man in a fight over a bicycle. Once he's back on the street, Ivan, an aspiring Reggae singer, convinces Mr. Hilton, a local music mogul, to let him record his song "The Harder They Come". He sees music as a way to break out of poverty, but Hilton offers him a ridiculously low fee. After learning that Hilton has all the music distributors and radio stations in his pocket, Ivan reluctantly accepts the money. Faced with more poverty, Ivan gets a job as a marijuana smuggler, but causes some noise when he realizes that he's only seeing a small fraction of the money generated by the drug trade. Unfortunately, he's not aware that the ganja dealers are in cahoots with the police. When Ivan's impulsive actions get him in trouble with both groups, he's forced to go on the run. 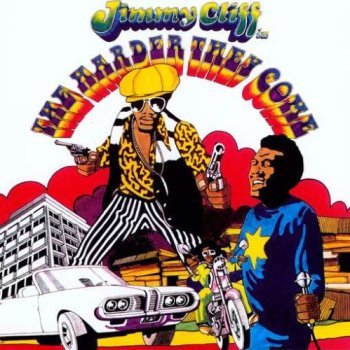 You can get it if you really want!

The film is notable for starring Jimmy Cliff in the lead role, who was the biggest reggae star before Bob Marley came along (Cliff actually helped Marley get his first record deal). Cliff wrote and performed most of the songs on the Cult Soundtrack, which all became hits in their own right: "You Can Get It If You Really Want", "The Harder They Come" and "Many Rivers To Cross". Other famous reggae songs in the film are "Rivers Of Babylon" by The Melodians, "Pressure Drop" by The Maytals and "007 (Shanty Town)" by Desmond Dekker. The hit songs made the soundtrack a genuine bestseller and many people in the West bought this Cult Soundtrack without ever having seen the film. Some might not even be aware that it is a companion to a movie! The album is considered to have popularized reggae in the rest of the world, laying the grounds for future acts, most notable Bob Marley. In 2003, UMG reissued the album, bundling it with a disc compiling other singles from the early days of reggae.

Many tropes to cross