Music / With a Little Help from My Friends 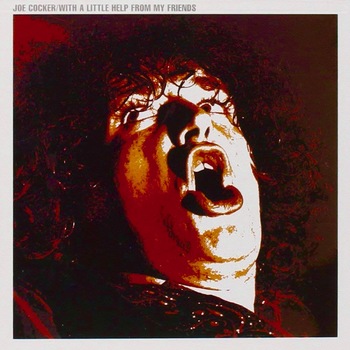 British bluesman Joe Cocker started his career just as The Beatles and The Beach Boys codified the "songwriter as performer" norm in rock, a less-than-ideal scenario for a touring pub singer with a setlist from the Chuck Berry and Ray Charles back catalogs. "Vance Arnold" may have been gifted with a gravelly, Charles-like voice and a sympathetic "blue-collar kid makes good" backstory, but even the presence of guitar hero Jimmy Page couldn't generate interest in his 1964 take on "I'll Cry Instead" and Cocker was quickly dropped from Decca Records.

Undeterred, Cocker made another run at the big time in 1968. Holing up with Procol Harum producer Denny Cordell and an army of the best session men in rock - including Page - Cocker balanced a residency at London's Marquee Club with the recording sessions that produced his debut album, With a Little Help from My Friends. Still mostly reliant on cover songs, Cocker nonetheless had enough success with the original ballad "Marjorine" to generate interest in his takes on Bob Dylan and Traffic. Yet his reworking of the title track, a Sgt. Pepper's throwaway sung by Ringo, into a dramatic soul belter in 7/4 time featuring a chorus of former Raelettes and Steve Cropper-styled power chords from Page, managed the rare feat of covering up a Beatles song.

With a Little Help from My Friends made an instant star out of Cocker, a status he would solidify at Woodstock later in the year. The album's success, along with strong cover albums by Three Dog Night, José Feliciano, and a revitalized Elvis Presley, restored the "rock interpreter" to pop cultural legitimacy, at least for a time.

What would you do if I listed some tropes? Would you stand up and walk out on me?