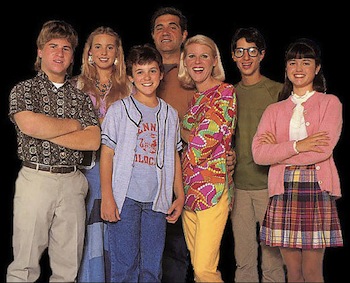 The Wonder Years is a nostalgic semi-comedic series about a boy growing up in The '60s — or, to be more accurate, a middle-aged man reminiscing about growing up in The '60s, with a voiceover narrating/voicing the boy's thoughts. The series was basically a warmhearted and vivid recollection of a specific time and (inspecific) place. Created by Neal Marens and Carol Black for New World Television, this classic series ran from 1988 to 1993.

The boy in question, Kevin Arnold (Fred Savage), has an abusive older brother named Wayne (Jason Hervey), a hippie older sister named Karen (Olivia d'Abo), and parents (Dan Lauria and Alley Mills) who, while still in love each other, would often fight. Kevin's best friend Paul Pfeiffer (Josh Saviano) is a gangly geek with frequent asthma attacks, and the Girl Next Door is Winnie Cooper (Danica McKellar), with whom affection is mutual but "She Is Not My Girlfriend".

The show is one of the earliest half-hour sitcoms done in single camera format — and without a laugh track, being a precursor to the shows that are considered to launch the format such as Spaced and Malcolm in the Middle. It wasn't afraid of addressing touchy subjects and was often frank about things that happen when growing up. One episode dealt with Kevin getting to touch a girl's breast for the first time.

The show aired on ABC from 1988 (when it premiered following Super Bowl XXII) to 1993; the show's continuity runs from 1968 to 1973, seventh grade through eleventh grade for Kevin and his friends.

The Wonder Years has long been one of the most-requested shows for TV-on-DVD fans, but the music rights clearances were considered too expensive to make the set worth it — until 2014, when Time-Life announced a complete series release of the show

that has 96% of the original music (285 individual clearances) left intact, including the show's famous opening theme (Joe Cocker's version of "With a Little Help from My Friends").

A reboot, featuring an all-black cast and taking place in 1960's Montgomery, premiered on ABC in 2021. Savage produces alongside Empire co-creator Lee Daniels and Disney themselves, via their 20th Television division; 20th was the legacy successor to original producer New World Television after News Corporation bought out New World just to get their Fox-affiliated stations.

The Wonder Years contains examples of the following tropes:

Chuck quickly leaps out of the moving pickup truck.