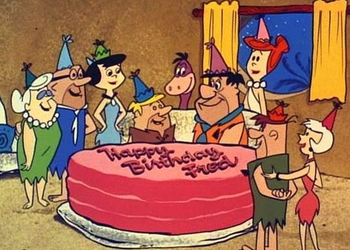 "You get your very own spotlight tonight
'Cause it's all about you
Yeah, it's all about Pearl
You're the birthday girl..."
— Boys Who Cry, SpongeBob SquarePants, "Whale of a Birthday"
Advertisement:

So our character(s) wake up to a normal day. It's your typical average day, and everyone is mulling about their own business...

It's somebody's birthday! The birthday episode is where an episode is dedicated to celebrating someone's birthday.

Typically seen in fiction as a device with various possible purposes, ranging from showing what characters were like in the past, having an opportunity to bring non-main-cast characters into the spotlight or even just representing a stage of growth in-series. For an example to count, the birthday, or the celebration of the birthday (they are not necessarily the same thing), has to at least be a significant part of the episode it appears in.

A Super-Trope to Forgotten Birthday, Surprise Party, Ironic Birthday, Dangerous 16th Birthday, and The Hero's Birthday. Unfortunately, characters who are Birthday Haters tend to experience them at least once. If something bad happens to the guest of honor during the episode, then it's A Birthday, Not a Break. The Ageless Birthday Episode is a special subtype in which the age of the character having the birthday is never mentioned, perhaps because the character in question is technically Not Allowed to Grow Up, but the writers wanted to do this plot anyway.

Lobo was hired by Sniff to free his brother Slaz from Oblivion. Things got complicated when Lobo learned that Slaz is celebrating his boyfriend Major Snake's birthday.

Lobo was hired by Sniff to free his brother Slaz from Oblivion. Things got complicated when Lobo learned that Slaz is celebrating his boyfriend Major Snake's birthday.