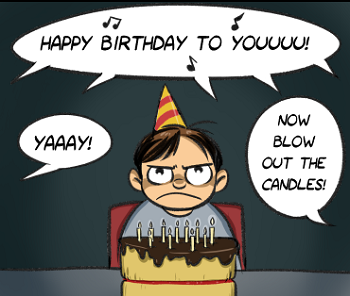 "I don't like loud noises. And people making a fuss. And I especially don't like people celebrating because they know a piece of private information about me. Plus the whole thing is a scam - birthdays were invented by Hallmark to sell cards."
— Ron Swanson, Parks and Recreation
Advertisement:

This character hates their birthday. And there's usually always a reason for it. Whether something traumatic happened or they just don't like getting older, they see no reason to celebrate. Or maybe the person Never Had a Birthday Party or Doesn't Know Their Own Birthday, making them resentful about the concept.

Sometimes Truth in Television when a person's birthday falls on a holiday (e.g. Valentine's Day) or the day when something bad occurred. And some people simply don't like the feeling of getting old, especially if their life is not on the right track.

For extra drama, this character is likely to be the recipient of a Surprise Party from their well-intentioned friends, leading to awkward explanations. Or maybe to a change of heart.

Compare Milestone Birthday Angst (when a character is dreading a specific birthday in particular), Crappy Holidays (which includes people who hate holidays) and The Grinch (for characters who specifically hate Christmas). See also Grumpy Bear and The Eeyore for characters who are in a bad mood when everyone else is celebrating. See also Birthday Party Goes Wrong.