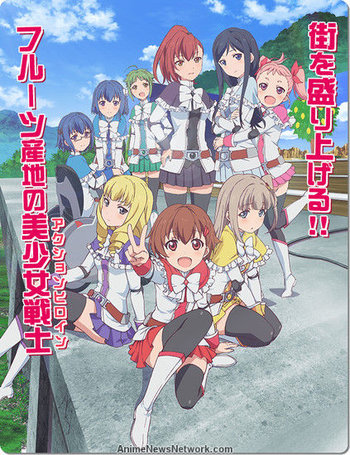 Action Heroine Cheer Fruits is a Summer 2017 Anime that riffs off the "local hero" and "yuru-chara" (crude character) booms in Japan: where mascot characters and heroes (of extremely variable quality) are created to represent or promote local districts and businesses, government organisations, and public awareness campaigns. Despite (or more accurately, because of) their charmingly low-budget aesthetic, local heroes and yuru-chara have become massive economic powerhouses in Japan and shift billions of yen worth of merchandise annually. In the setting of Cheer Fruits, "Action Heroines" are performers and stunt-women who produce Tokusatsu stage shows to promote their local districts, and compete against each other in the national popularity rankings.
Advertisement:

The city of Hinano has a failing economy, a dying tourist trade, and is facing the very real possibility of being absorbed by a nearby town. High schooler Mikan Kise takes her little sister to see Kamidaioh, the current #1 Action Heroine, only to find out that the performance has been cancelled. In order to placate her sister, Mikan swears to bring her Kamidaioh, and ends up putting on an amateur show with the help of her Tokusatsu-loving classmate Ann Akagi. Their show draws the notice of Student Council President Misaki Shirogane, the niece of Hinano's mayor, who tasked Misaki with creating a strategy that could revitalize the city and save the town hall from demolition — and Ann and Mikan's show gives her the idea of creating Hinano's very own Action Heroine team. The show follows the efforts of the "Cheer Fruits" as they recruit more members, find a performance venue, improve their production values and scripts, and work towards becoming the most popular Action Heroine unit in Japan.