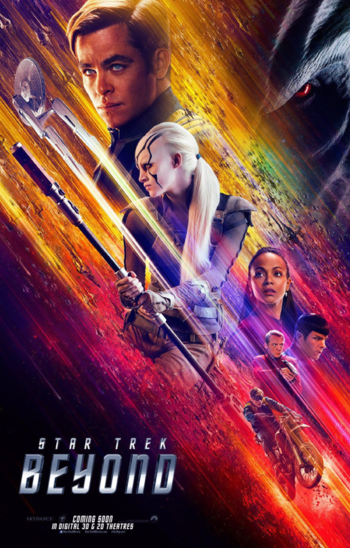 "This is where the frontier pushes back."
"We got no ship, no crew. How are we gonna get out of this one?"
— Captain James T. Kirk

The one where a Beastie Boys song is used as an actual weapon.

Star Trek Beyond is the thirteenth film in the Star Trek film series, released in 2016.

The sequel to Star Trek Into Darkness and the third film in the "Kelvin Timeline" that began with Star Trek (2009). Premiering at San Diego Comic-Con on July 20, 2016 and worldwide on July 22, it coincided with the franchise's 50th anniversary. It is directed by Justin Lin with a script by Simon Pegg and Doug Jung.

Star Trek Beyond provides examples of:

"We will find hope... in the impossible."