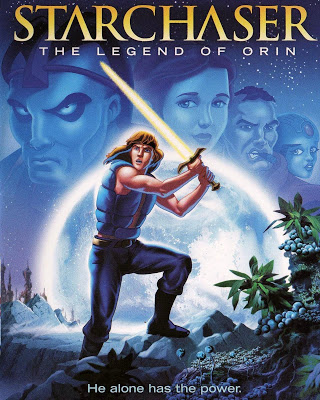 Starchaser: The Legend of Orin is a 1985 animated Space Opera film. The story follows Orin, an escaped slave who must free his people from the Dark Lord after being able to wield a sword that Only the Chosen May Wield. Helping him along the way are a cigar-chewing smuggler, his neurotic Robot Buddy, a sassy fembot, a governer's daughter and a Fairy Companion.

Just from that synopsis one would think that this has something to do with a certain famous and successful space saga. Indeed, this film is very similar in terms of story and design, but has since become a Cult Classic.

Tropes that appear in this film: