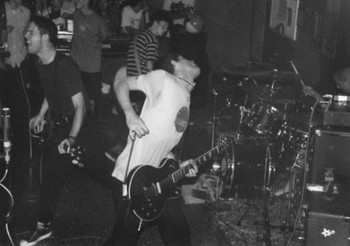 A pic that probably captures the intensity of their music perfectly.
Advertisement:

Indian Summer was an Emo band from Oakland, California that existed from 1993 to 1994. And might be the most influential band you've never heard of.

Like most such bands of the era, they had humble beginnings, when the brothers Adam and Seth Nanaa started playing music with Scott Torguson, who ran a small label called Sunney Sindicut. The band was called Sinker and had an even briefer existence, not even lasting a year and releasing nothing but a demo tape, two 7-inch records (one released posthumously) and a comp track. However this introduced the Nanaa brothers to Eyad Kaileh and Marc Bianchi who they also started playing music with and after the demise of Sinker started their own group: Indian Summer.

To the members, Indian Summer was less a band as it was a platform for experimental music. According to interviews, they never played the same song the same way twice and they pioneered a few oddball things in their music that became minor tropes in themselves. One defining trait of the band was that many of their songs had an old Bessie Smith blues record playing in the background, audible during the quiet parts and intros of the songs. Vocals alternated between spoken word, soft singing and intense screaming. Loud/soft dynamics were a huge part of the band's sound, though they were hardly the first band to play with this, even in Emo, it's largely agreed today they were at least the Trope Codifier, with many such song structures today directly linked back to them. And like most Emo bands of the era, their music was fully released only on vinyl, their entire output consisting of a 7-inch record, a couple splits and some compilation tracks. The band never released a full length record and even their entire compiled works is only about a half hour long. The only initial digital release of their music was a recording of a show they played for a college radio station, titled Live Blue Universe, which itself was released well after the band's demise.

After developing a reputation for themselves in the Bay Area, Indian Summer embarked on their one and only national tour in 1994, eschewing traditional arenas or even big name local music clubs, instead mostly playing in VFW halls, youth centers, and even sometimes just people's basements. They traveled very light, often only sleeping on people's couches instead of hotels, and according to Word Of God some of the members lost as much as 20 pounds during the tour. After leaving Canada and ready to do the final leg of their tour things got even worse, the band's scheduled date in Seattle and the rest of the tour fell through, leaving them broke and without being able to get paid, thus forcing them to resort to stealing gas and dine and dashing to get back to Oakland. At that point, the band somewhat anticlimatically dissolved, the members started to grow apart, some had changing musical tastes and there wasn't seen any reason to continue Indian Summer.

Sounds like they would've likely been forgotten after that, and for awhile they basically were...until about 6 years later when Napster and other file swapping services upended the music industry. This allowed their music to be heard not only by people who were too young to have experienced them during their initial run, but who also lived far away from where this exclusively underground style was played. As a result, their popularity immensely swelled and their records started going for big prices on online auctions sites. In 2002 a CD compilation of their entire discography titled Science 1994 was released but also had a limited distribution and lacked mainstream attention. For well over a decade the band still languished in the underground, despite their lyrics being a mainstay of quotes on Millennials' LiveJournal and MySpace pages.

However the "emo revival" of The New '10s might've finally brought them the mainstream attention they never sought. The band has appeared on lists in publications such as Rolling Stone and Vulture, and in 2019 had another release of their music on vinyl put out again by the Numero Group, a label dedicated to re-releases of long forgotten and out of print music. As a result their streaming rights were also picked up, and their music is now available on all online music stores and streaming services. Today it's just as accessible and easy to listen to as Lady Gaga and Katy Perry...a truly amazing thing no one would've expected. They've also picked up worldwide recognition, with their songs being covered in countries such as Russia and the Philippines.

If you haven't heard them, setting aside a half hour to listen to their full output would probably be a rather enriching use of your time.