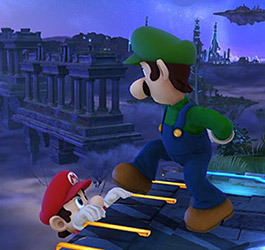 One character has just fallen over the edge of a cliff after getting pushed over by the villain. Fortunately, he is able to grab onto the side of the cliff to prevent himself from falling to his death. However, the villain, being the Card-Carrying Villain that he is, attempts to get rid of the hero by stomping on his hands, causing the hero to slowly lose his grip on the cliff that he's hanging on to.

This can easily backfire if the villain misses the hand or the hero manages to grab their leg with the other arm, resulting in the villain falling instead. In a way, this trope is the villainous opposite of The Hero's common tendency to try to pull up the villain when he finds himself in a similar predicament.

This is a common Villain Trope that can show up in some forms of media.

Fingore is usually implied, if not invoked.