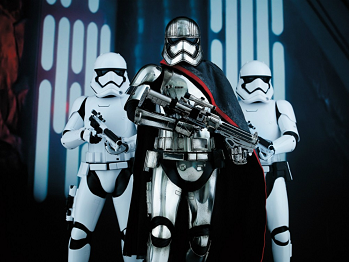 It's not very leader-like to give orders yourself when you're trying to rule the world. Whilst you leave the hunting of the MacGuffin to your champion and the creation of the world-ending device to your Mad Scientist, who's leading your legions of terror? That's where the Mook Lieutenant comes in.

The Mook Lieutenant is the commanding officer of the evil army. He will be seen in the background to give orders, ask boneheaded questions about the weather-controlling device and give the Big Bad someone to talk to when The Dragon is a person of few words. Very rarely in For the Evulz, he's normally a career military man who views the heroes as rabble and does not question orders. Has a high mortality rate where failure is concerned. More often than not he will look exactly like any other Mook, except that whilst all the other Mooks are wearing masks, the Mook lieutenant will usually opt not to wear one, or he will wear an Ace Custom version just to let everyone know of his importance.

"Lieutenant" here refers to the position of right hand man in general, rather than a specific rank. That said, on the Sliding Scale of Villain Threat he'll tend to be above the rank and file, but can be anywhere from weaker than, on par with, or even stronger than the Elite Mooks.

Compare Mook Commander for the gameplay equivalent of this: Someone who gives benefits for the mooks in the battlefield while also participating on the field himself. See also Middle-Management Mook.

The Commander Shroob leads the Shroob army, assembling them in formations. His attacks include tossing his Shroob lackeys and a faster, stronger version of the typical ray gun attack.

The Commander Shroob leads the Shroob army, assembling them in formations. His attacks include tossing his Shroob lackeys and a faster, stronger version of the typical ray gun attack.