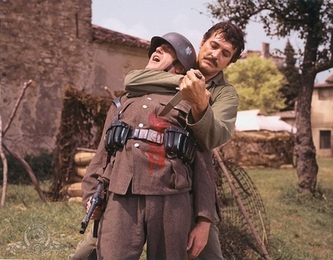 "Here's your problem! You had a knife in your spleen!"
Advertisement:

It's World War II. In the Italian village of Reanoto, the SS, under the command of the cruel Major Taussig, massacres the entire adult population while a group of children look on from nearby. Not long afterward, a group of American soldiers led by the stoic Captain Turner are to parachute in for a top-secret commando mission, but are waylaid by German forces led by the stern, no-nonsense Captain von Hecht. Only Turner survives, and barely. He's found by the kids from Reanoto, who are led by the borderline psychotic Aldo.

The kids nurse Turner back to health aided by a beautiful captive German doctor named Bianca. In return for Turner teaching the kids how to load and fire machine guns, Aldo and the gang will help Turner complete his original mission, filling in for his dead team and blowing up the supposedly impregnable Della Norte Dam. Turner clashes with Bianca over what is best for the boys, whilst Aldo begins disliking the American taking over leadership from him, and, in the meantime, von Hecht is hunting for Turner, whom he knows is alive.