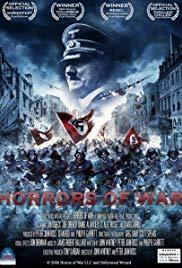 In war, death is not the only thing to fear.
Advertisement:

Horrors of War is a 2006 American Sci-Fi Horror war movie.

World War II is coming to an end, and the Nazis have gotten desperate to win. Hitler has authorized for the unleashing of various super-science monsters, and has tasked Dr. Heinrich Shaltur with doing so. Lieutenant John Schmidt is a formerly-disgraced Army man who has lost many men to Shaltur's creatures. Due to his experience, the OSS tasks Schmidt with taking Shaltur down for good.