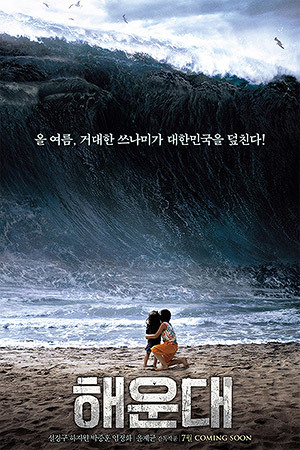 Water, in large amounts and at anything above a modest velocity, is very dangerous stuff. Storm surges and flash floods claim hundreds of lives and cause millions of dollars in damage every year, while major disasters such as dam collapses and tsunamis can cause widespread destruction.

When someone steps out of their house and sees a 200-foot-high wall of the stuff stretching away to the horizon and moving at a deceptively patient pace toward them it usually results in an intense Oh, Crap! moment.

Inversion of Soft Water—or an aversion, as even being buried by an avalanche of fluffy pillows would likely be quite lethal if there were a few million tons of them moving at 70 miles an hour. Can occur when a character who makes a splash really pushes himself to the limit.

Perspective and point of view can play with this trope. If you are out on the open ocean, a wave only needs to be big enough to capsize your vessel to fully qualify. If you can haul your boat on a trailer behind the family automobile, a 10 foot / 3 meter wave can be a major problem. If you are on a cruise ship or an aircraft carrier, a wave big enough to qualify for this trope could wipe out entire small coastal villages once it hits land.

For a slower, but just as dramatic, form of watery doom, see Rising Water, Rising Tension.

Later in the song the chorus is repeated, twice, back-to-back. Three seconds later the music abruptly stops. Then—if you happen to be listening to the two-fer CD The Wayward Bus/Distant Plastic Trees—enjoy four-and-a-half minutes of silence, followed by the songs on the Distant Plastic Trees LP. Perhaps (analogous with "hidden tracks"), this qualifies as a HiddenAlbum?