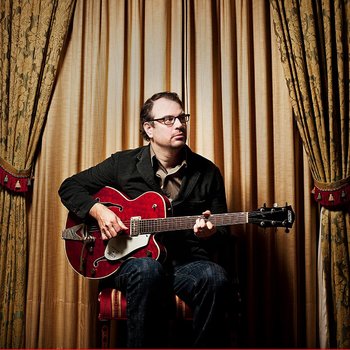 "Hello, time bomb, I'm ready to go off..."
Matthew Frederick Robert Good (born June 29, 1971) is a Canadian singer-songwriter, writer, activist, blogger, and constant creator of many stripes. Good's career began in the early 90s with folk-rock outfit The Rodchester Kings. It wasn't until the late '90s and start of The New '10s that Good reached mainstream success as the eponymous "Matthew Good" of Matthew Good Band, shedding the folk-rock genre for various forms of "alternative rock." The band released four albums between 1995 and 2001, garnering much critical and commercial success in Canada (it says something that the ballad "Apparitions" dominated Canadian radio for most of 1998.) His first solo album was released in 2003 to almost universal acclaim, earning Good three Juno Awardsnote Which he rejected: see Award Snub, including one for best music video for "Weapon."
Advertisement:

In the mid-2000s, Good's personal life fell apart: his wife divorced him, Good experienced profound dysphoric mania, and after hospitalization for a suicide attempt, he voluntarily entered a psychiatric ward for treatment for previously undiagnosed bipolar disorder. While inside, he wrote the bulk of the 2007 release Hospital Music, the last album necessary to fulfill his contract with Universal Music. To the surprise of Good, Universal, and the entire music industry, Hospital Music debuted at number one across all of iTunes with no promotion, hype, or advertising. Unsurprisingly, Universal offered Good a new contract, and since 2007, Good has continued to record, tour, and win awards. At present, he lives near Vancouver and is happily remarried. note Kind of. As of early 2015, it has been hinted that he had an extramarital affair, and the future of his marriage is uncertain.

Inside (and outside) Canada, Good is perhaps more infamous for his blogging, particularly his post following the 2004 American presidential election and his characterization of Americans, which earned quite a bit of controversy. Over the course of his career, he's maintained a blog of some sort (from the highly personal to the impassioned political). Topics of choice include: the rise of commercialism and the throw-away society; his belief in Canada as more than the puppet states of the United States; human rights issues (national and international); and the search for understanding. He is a vocal supporter of Amnesty International and Ceasefire (an anti-war organization), but his tendency to loan voice to thought earned him a reputation as a pretentious liberal. He embraced the attitude early in his career, appearing on stage during tours wearing a shirt saying "I hear Matt Good is a real asshole."

Tropes Relating To and Used by Matthew Good Include