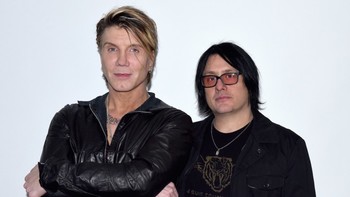 Left - John Rzeznik. Right - Robby Takac.
And I don't want the world to see me,
'Cause I don't think that they'd understand.
When everything's made to be broken,
I just want you to know who I am.
— "Iris"
Advertisement:

Goo Goo Dolls are an alternative rock/pop band that have been around since 1986. The band began as The Sex Maggots, formed by John Rzeznik, Robby Takac, and George Tutuska; they changed to the Goo Goo Dolls after being banned from playing in a club because their name was too 'obscene'. Tutuska was replaced by Mike Malinin in 1994 (who later left in the end of 2013), just before the band released their fifth album, A Boy Named Goo, and the success of their single "Name" pulled them into the public eye.

The band would have probably have been a One-Hit Wonder if not for the 1998 movie City of Angels; Rzeznik was asked to write a song for the movie and thus was born "Iris", one of the most played songs of the nineties. Placed on their sixth album, Dizzy Up the Girl, alongside other popular singles such as "Slide", "Broadway", and "Black Balloon", the band enjoyed quite a bit of fame into the early 2000s.

The band continues to play and release albums, but their popularity has decreased quite a bit since the late 90s. Their singles are somewhat successful and they have a contingent of loyal fans. Their sound has changed from punk and music similar to bands such as the Replacements in the late 80s and early 90s to focus more on the power ballads and more pop-friendly rock that made them successful in the 90s.

The band's current line-up, not including musicians hired for touring:

The band has released eleven studio albums, one live album, and three compilation albums. Their latest album, released in May 2019, is titled Miracle Pill.

Now we're grown up tropes that never knew their names: