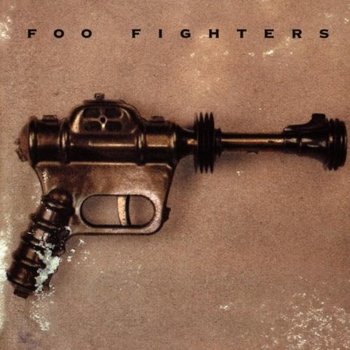 This is a call to all my past resignations...
It's been too long.
I thought I knew all it took to bother you
Every word I said was true and that you'll see
How could it be I'm the only one who sees
Your rehearsed insanity? Yeah

I still refused all the methods you abused
It's alright if you're confused, let me be
I've been around all the pawns you've gagged and bound
They'll come back and knock you down and I'll be free
"I'll Stick Around"
Advertisement:

Foo Fighters is the self-titled debut album from the Alternative Rock band of the same name. It was released through Roswell Records, and distributed by Capitol Records, on July 4, 1995.

Dave Grohl, the band's sole member at the time, recorded every song on the recording by himself, except for the guitar solo on the song "X-Static," which was done by Greg Dulli of The Afghan Whigs and Krist Novoselic playing bass on "Big Me".

Originally intended as a one-off side project, the album garnered a ton of support from popular artists such as Tom Petty and Eddie Vedder, leading Grohl to hire a full band out of former Nirvana tour guitarist Pat Smear and the bassist and drummer from the recently disbanded Sunny Day Real Estate. The album had three successful singles, "Big Me", "This Is A Call", and "I'll Stick Around", along with "For All the Cows" in Europe, and the radio-only "Alone + Easy Target".

A lot of the songs feature nonsensical lyrics, disparate song style shifts, and even minimalist 8-track recording. Grohl has stated that this was intentional, since he mostly recorded these songs to help himself get through the depression he felt after Kurt Cobain's suicide. While the songs do resemble Nirvana's style, Grohl did things that set himself apart from Cobain's songwriting such as double- or quadruple-tracking his vocals, adding happier tunes such as "Big Me" or "Floaty", and introducing Punk Rock influences, as heard in the songs "X-Static" and "Wattershed".

The album was a commercial hit, going Platinum in the United States and United Kingdom. It peaked at #3 on the Official Charts Company album chart. While the singles didn't qualify for the Billboard Hot 100 due to Billboard's rules at the time regarding non-commercial singles, "Big Me" hit #13 on the Billboard Hot 100 Airplay chart. All three US singles hit the Top 10 of the Alternative chart, and all four UK singles were Top 40 hits on the UK Pop chart, with "This Is a Call" peaking at #5.

Foo Fighters became extremely popular thanks to its humble beginnings, and it allowed the band to continue to carry on Cobain's legacy through his influence. It was even nominated for a Grammy Award for Best Rock Album, and it lost to MTV Unplugged in New York, Nirvana's acoustic album released the previous year, which Grohl and Krist Novoselic accepted on Cobain's behalf.

Well, I troped about it, let it out, never was it true: