All Drummers Are Animals 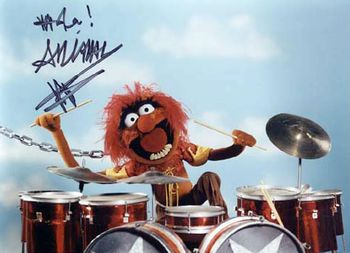 ...and yet sadly, despite our best wishes, not all drummers are Animal.
"A drummer's job is to use big sticks and beat on animal skins stretched across round pieces of wood. This takes absolutely no formal musical training to accomplish, of which the drummer has none anyway. To put it frankly, drummers just aren't too long out of the caves. They are primal and fundamentally flawed in their genetic code."
— Billy Queen, former drummer of Jacob's Dream, on drummers.

Drums connect with our primal selves. Maybe this is why most drummers will have animalistic tendencies, or if the current universe allows, actually be animals...

This is technically true (since humans are, by scientific definition, animals), but in the non-literal sense, this isn't always the case. Real Life instrumentalists can often pick their instrument in accordance with their personality. And regardless of any personality implications, drums sets require the largest and most muscular movements of any instrument in a modern/rock music repertoire, and therefore it really helps to be physically fit. In terms of intelligence, drummers are actually said to be among the most intelligent of musicians since most of their work is improvisational and more complex than traditional compositions. This is especially the case with jazz drummers like Buddy Rich and Max Roach. Yet Animal in fact was designed after Fleetwood Mac's drummer Mick Fleetwood, who is quite tall and slender. His personality, however, is rumored to have been based on The Who's Keith Moon.

When dealing with a Five-Man Band, The Big Guy usually becomes the drummer.

Compare Cymbal-Banging Monkey, Dumb and Drummer, and Rotten Rock & Roll. Also compare Primal Chest-Pound, where a character drums on himself, also often indicating a savage, animalistic personality. See also Nobody Loves the Bassist for another example of a band-member stereotype.

Vikke is a Viking Metal Zombie, a drummer that generates lightning.

Vikke is a Viking Metal Zombie, a drummer that generates lightning.