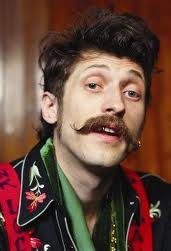 Eugene Hütz
"One thing about them gypsies, they never bored nobody"
—"Break The Spell"
Advertisement:

Okay so take Eastern European folk music, add a dash of polka, and blend with straight-up Punk Rock. This is something along the lines of the recipe for Gogol Bordello.

Led by Ukrainian frontman Eugene Hütz, Gogol Bordello has exploded in popularity since their first single's release in 1999, with tours through Europe and the United States. Their music has appeared in Wristcutters: A Love Story (the character of Eugene, played by Shea Whigham, is based on Hütz) and the band appeared in the movie of Everything Is Illuminated, with Hütz playing the character Alex Perchov. They have played with bands of various genres, including folk-punk bands like DeVotchKa and Flogging Molly.

The band is best known for their extremely high energy, theatrical shows, "gypsy punk" sound, and cultural diversity (within their songs and within the band itself). Their lyrics are often political, dealing with immigrant life, poverty, and Romani rights. Accordion, violin, upright bass, and other instruments not commonly used in rock are featured prominently.

Tropes related to, invoked by, or sung about by Gogol Bordello: