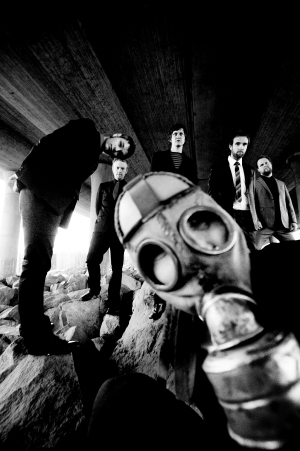 From left to right: Janove Ottesen, Terje Winterstø Røthing, Helge Risa (and The Mask), Geir Zahl, Rune Solheim, and Øyvind Storesund
"You wake up... you grab the morning paper... and although it seems like any ordinary day... it isn't. For one extraordinary reason: One band; two oil barrels; three chords; four dreams, five lies, six ties, seven deadly sins, and eight ways to stay alive...! They know who you are... they know where you live... they're the Kaizers Orchestra!"
— Concert introduction, circa 2008
Advertisement:

Kaizers Orchestra is a Norwegian alternative rock band who have attained significant international popularity owing to their unique and energetic live act, notably featuring oil barrels and crowbars being used as instruments of percussion, a mysterious gas-masked man playing an antique pump organ, and a charismatic Large Ham lead vocalist. And what's more, they insist on singing in their native Norwegian dialect, making their international renown all the more impressive.

Their extensive catalog of quirky Genre Roulette songs prevalently features cryptic, surrealistic "storytelling" lyrics in the vein of Tom Waits, that are often part of an interconnected, cross-album Myth Arc. Their lyrical subject matter includes World War II, The Mafia, parapsychology, (and its often resultant) insanity, and cocktail drinks. Most songs are composed by frontman and multi-instrumentalist Janove Ottesen, with a lesser share of compositions credited (or co-credited to) to second guitarist Geir Zahl.

After over a decade of playing together as a group (though many of the members go further back than even that), having reached the pinnacle of success in Norway eight times over, as well as achieving unforeseen international success that goes far beyond the European continent, they held their final concert in the fall of 2013. It has been specifically cited that this is not a "break-up", but whether or not the band will ever get together again is not known at this point, though a rest period of a good number of years is to be expected regardless of the outcome.