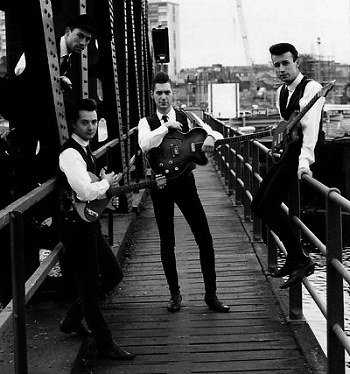 "Take it to the bridge, lads!"
"We got a dance that's really in, oh yeah
from London town to old Berlin, oh yeah
Let's stomp, let's stomp, let's stomp
Everybody do the Kaiser Stomp!"
— "Kaiser Stomp"
Interviewer: "Do you consider yourself the "Bootleg Beatles?"
Kaiser George: "Absolutely not! (laughs) There's somebody already doing that, and that's just not what we're about at all. We're just a beat group. We're not trying to be The Beatles... we're not Gerry and the Pacemakers, you know, we're just The Kaisers."
— BBC radio interview
Advertisement:

The Kaisers (1992-2002) were a Scottish beat music/garage rock quartet, known for their peerless replication of the sound and look of the British (pre-Beatles) beat boom of the early '60s. This retraux approach extended to album cover art and merchandise to the point where you could sandwich a Kaisers record amongst a collection of legit '60s records and not know you were looking at an album recorded in the '90s until you took a closer look. They favored vintage attire, instruments and recording gear of the period, and recorded music mixed exclusively in monophonic sound, with few to no overdubs applied.

Contrary to media misconceptions that they were an all-out cover band (though to be fair, they always did have a good share of covers under their belt) they also boasted a respectable share of original compositions reminiscent of their beat influences such as Bern Elliott & The Fenmen, The Big Three, and The Undertakers, which also get points for sounding like legit '60s compositions. Original compositions would come to outnumber covers more for each new record released, to the point where their final album, released in 2002, contained only one.

The group went through a number of personnel changes over the years; all members had their own band alias in the form of "Kaiser" being attached as a prefix to their given name. George Miller (lead guitar) and Johnny Maben (drums) were the only constant members of the group, with Miller also being the group's primary songwriter (Maben being occasionally co-credited).

Tropes associated with The Kaisers: