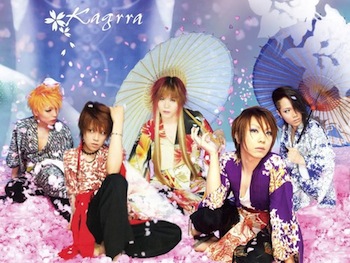 Kagrra, (spelled with a comma) was a Japanese band that combined visual kei with traditional Japanese music and aesthetics, a concept that they referred to as "Neo Japanesque". They were formed in 1999 using the name Crow, but changed their name to Kagrra (without the comma) in 2000. The name is an intentional misspelling of "kagura", Shinto music and dance. The comma was added in 2004 to mark the band's major debut and release of the single "Urei".

In 2005 they took the Neo Japanesque concept up a notch when Shin began playing the koto in many of their songs. Also in 2005, they began making a sort of internet-only variety show called "Kagrra, no Su" (The Nest of Kagrra,) that often featured the members participating in games or contests with each other, such as table tennis, drawing competitions, and card games. These are almost always hilarious.

As of March 2011, Kagrra, has disbanded and several of the members have begun working on new projects.