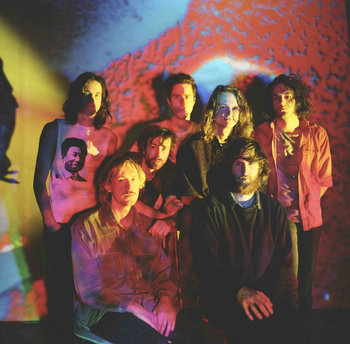 King Gizzard and the Lizard Wizard is an Australian Psychedelic Rock and Garage Rock band. They were formed in 2010 in Melbourne, and they consist of members Stu Mackenzie (vocals, guitar, wind instruments), Ambrose Kenny Smith (vocals, keyboards, harmonica), Cook Craig (guitar), Joey Walker (guitar and vocals), Lucas Skinner (bass), Eric Moore (drums 2010-2020), and Michael Cavanagh (drums). They probably rank among the weirdest bands to ever come out of the Australian psych-rock scene.

They were originally going to be called "Gizzard Gizzard", which was conceived by lead vocalist Stu Mackenzie, but another member of the band wanted the band to be named "Lizard King", as a tribute to Jim Morrison of The Doors. They eventually decided to compromise and name the band King Gizzard and the Lizard Wizard.

They started releasing material in 2010, with 2 singles.. One release from the following year, called Anglesea, was a four track EP released on CD. The three, whilst once unavailable publically, are now available on the Bandcamp-exclusive release: Teenage Gizzard. The second Willoughby's Beach EP, was what got them noticed in Australia, and got them chosen to play at the Meredith Music Festival in December of that year. Around a year later, they would self-record their first full-length album, 12 Bar Bruise. It was inspired by Surf Rock and Garage Rock, with King Gizzard giving those sounds a psychedelic flair. They released it on Bandcamp, so people could stream the entire thing before they buy it.

The band has a lot of time on their hands, and since 2012, they have recorded twenty studio albums, five official live albums, and four EPS, each of which have different sounds, while still sticking to their roots and trademark songwriting motifs. In 2013, they recorded the Spaghetti Western-inspired Eyes Like the Sky, and the album Float Along - Fill Your Lungs, where they went full Psychedelic. They became rather popular in 2014, where they released Oddments and I'm In Your Mind Fuzz, where they would start to become more professional.

In 2015, they started recording Quarters!, a Concept Album that has four songs - each of them lasting 10 minutes and 10 seconds - and containing influences from Jazz Fusion and Progressive Rock. Later that year, they would release Paper Mâché Dream Balloon, which was a mostly acoustic album influenced by Folk Rock acts like The Byrds.

In 2016, they released what many considered at the time to be their magnum opus: Nonagon Infinity. It was designed to be an infinitely looping album, containing nine songs that all segue into each other, including the beginning and ending tracks - hence the title of the album. And to add upon its success, they decided to release five more albums in 2017: the first being Flying Microtonal Banana in January, the first in an ongoing series of albums where they experiment with microtones (which are the notes that are in between semitones (e.g. E and F)). This was followed up by Murder of the Universe in June, a Concept Album split into three separate narrated stories, following the same styles as the previous two albums. In August, they released Sketches of Brunswick East, a collaboration with the band Mild High Club, which saw them move away from their sound almost completely and into improvisational psych-jazz. Following this, Polygondwanaland was a psych/prog rock album released in November, and it was put on their website and Bandcamp page for people to download, rip to CDs, press onto vinyl, etc. Finally, the band fulfilled their promise in December 2017 with the release of Gumboot Soup, a Genre Roulette of an album containing songs that didn't quite fit into the other four releases, some resembling their sound and others representing completely new styles for the band.

With a promise of new music in 2019, King Gizzard released a song in late January called "Cyboogie", which details a funkier, synth laden, boogie-rock sound inspired by the likes of Canned Heat, Little Feat, and ZZ Top. This new release, coupled with B-side "Acarine" seemed to confirm a new album, which wasn't officially announced until early March, called Fishing For Fishies, coming out on April 26. Not long after the release of Fishies, they released two new singles: "Planet B" on April 8, and "Self-Immolate" on May , which completely ditches the happy-go-lucky, lighthearted sound of ''Fishies'' in favor of a darker Thrash Metal approach with lyrics about climate change and enviromentalist themes. This was announced on June 21st to be coming from their second album of 2019 Infest the Rats' Nest

In July 2020, they released the first single of the year, "Honey", a return to the microtonal tuning used in Flying Microtonal Banana. In the following months they would release "Some of Us" and "Straws in the Wind", the latter flowing seamlessly into the former. In lieu of simply releasing the next single, "Automation", King Gizzard released the song's stems and plenty of footage for fans to create remixes and custom music videos with. In November they would release the full album K.G., the second volume of their Explorations Into Microtonal Tuning series, alongside the music video for the album's final single, "Intrasport". Not even three weeks would pass before they released an animated music video for a song called "If Not Now Then When", which begins right where the final song from K.G. ends, all but confirming suspicions that a direct sequel to it was on the way.

In 2021, the single for "If Not Now Then When" was quickly followed up with the playful rocker "O.N.E" and the prog-rock heavy "Pleura", accompanied by a music video recorded and edited in the 24 hours before the single was released. Accompanying the release of "Pleura" was the official confirmation of the K.G sequel album, titled L.W., to be released one week later on February 26th, 2021.

Then, on the 7th of May, 2021, they announced their next album: Butterfly 3000 to be released a month later, with no singles. The album dropped a month later, being a Lighter and Softer psychedelic pop album.

On December 17, 2021, the band announced the long-rumored album Made in Timeland, which was to be released at the Timeland festival on New Year's Eve. This festival was cancelled due to concerns over COVID-19, and the release of the album was delayed to March 5 with their festival Return Of The Curse Of Timeland. Made in Timeland is an electronic album that consists of two fifteen minute songs, "Timeland" and "Smoke and Mirrors."

Their twentieth album, Omnium Gatherum, was announced on March 8, 2022, alongside its first track "The Dripping Tap." It had two other singles, "Magenta Mountain" and "Kepler-22b". The album was released on April 22, 2022 and is their longest album yet with a diverse sound.