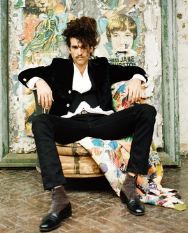 You know you're jealous of that hair.
Advertisement:

King Charles (born Charles Costa, March 6, 1988) is a British singer and musician known for his excellent songwriting and over-the-top personal style. After studying at Durham University for a year he left school and returned to London to form a band called Adventure Playground. When AP fell apart Costa struck out on his own as King Charles, sporting a massive pompadour, costumes reminiscent of French royalty, and one fantastic moustache.

King Charles has been writing music since the age of seventeen and, in 2009, won the International Songwriting Competition in Nashville, Tennessee by unanimous vote. He has since signed with Mi 7 Records and released his first album, Loveblood, in May 2012. Although he says he has fallen in love with country music the music on his album includes a wide spectrum of styles, from the urban-inspired Polar Bear to the obvious Caribbean influences of ''Loveblood'' and Lady Percy. His tunes are dangerously catchy and his lyrics tend to focus on romantic topics like love and rejection. He teamed up with Mumford & Sons for his most popular track, The Brightest Lights, and has been touring with the band.