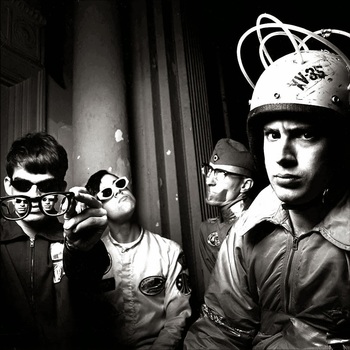 The band's most notable lineup in the mid-90's. From left to right: Star Crunch, Birdstuff, Dexter X, and Coco the Electronic Monkey Wizard.
Advertisement:

Man or Astro-man? are a mostly instrumental band from Auburn, Alabama, known for combining the surf-rock style of the early sixties with various samples of old, kitschy sci-fi movies, with a decided punk edge that has become more prominent over time. They're also known for covering Mystery Science Theater 3000's "love theme". Their connection to the show runs fairly deep, as many of the aforementioned samples of kitsch sci-fi come from movies that were riffed on Mystery Science Theater 3000, and Joel Hodgson has done pyrotechnics for the band's stage shows. The main members of the band go by Star Crunch (guitar, and vocals when those come up), Birdstuff (drums), and Coco the Electronic Monkey Wizard (bass & electronics). Other members have joined and left the band over the years, most prominently guitarists Dexter X and Dr. Deleto.