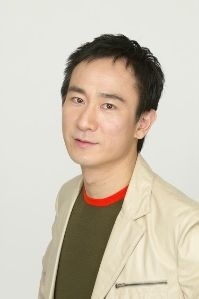 —What is this? A troper! Get out of my way! I have to describe myself for my article!

—(*startled*) I beg of you please! Allow me to describe myself. I was born as Tsutomu Narita in 1964. I am a freelancer seiyuu. You may have first noticed me as the voice of Sesshomaru in Inuyasha. Since then, I have done many starring roles in other anime. Oh, and did I mention I am the Japanese voice of Johnny Bravo?

Well, I'm supposed to be describing you, so—

—Out of my way! This is my article, not yours! ALL HAIL BRITANNIA! Today, you know me memetically as the voice of Jeremiah "Orange-kun" Gottwald in Code Geass, as well as Michael Roa Valdamjong in Melty Blood.
Advertisement:

—But don't you dare confuse me with the anime singer of the same name! As in the guy who sang songs for Denshi Sentai Denziman!

—Now that I've finished describing myself, Take This! THE STORM OF MY NOTABLE ROLES!:

—CARVE INTO YOUR MEMORIES! KEN NARITA!