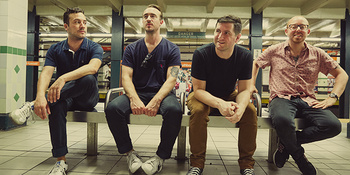 An American rock band that originated in Scranton, Pennsylvania but is now based in Philadelphia. The band was founded in 2006 by Greg Barnett, Joe Godino, Eric Keen, and Tom May, who remain its sole members. With the release of Hold On, Dodge and Chamberlain Waits, the group began to garner attention within the Punk Rock and Alternative Rock realms. Independent behemoth label Epitaph Records signed The Menzingers in 2011, garnering them a wider audience and setting the stage for the acclaimed On the Impossible Past. Despite some fans and critics' unwavering devotion to OTIP, the Menzingers have continued to enjoy growth and success with 2014's Rented World and their latest record After the Party.

Stylistically, the group is noted for pairing Three Chords and the Truth charm with confessional lyrics that often make use of literary references. Similarities have been drawn to The Gaslight Anthem, Against Me!, The Replacements, Jawbreaker, Green Day, the Mountain Goats, and The Clash. In addition to their studio recordings, the Menzingers are known for their relentless touring schedule and the cathartic and energetic nature of their live performances.

The Menzingers provide examples of the following tropes