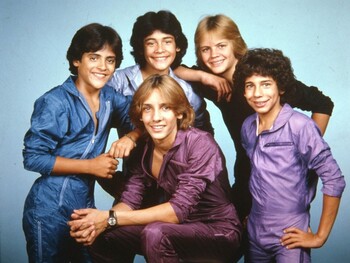 The 1981 lineup of a Revolving Door Band
Advertisement:

Menudo was a Puerto Rican Boy Band (1977-1997, 2007-2009) formed in the 1970s that became one of the biggest boy bands in history, being one of the progenitors of the boy band movement of the 1980s and 1990s and leading the way for groups from the U.S. mainland like New Kids on the Block and Boyz II Men. Their producer, Edgardo Díaz, required that members leave the band when they turned 16 in order to maintain the band's popularity with young girls (though this rule was removed in 1988), necessitating a rotating lineup over its 22 years that included Ricky Martin.

Menudo released a total of 44 studio albums and 16 compilation albums, and their success during the 1980s led to their appearances on Silver Spoons, Sesame Street, and The Love Boat, and the release of two feature films, Una Aventura Llamada Menudo (for which they also recorded the soundtrack) and Menudo La Pelicula. Additionally, they supplied the Season 2 opening theme for Nickelodeon's run of Spartakus and the Sun Beneath the Sea.

This music group contains examples of: