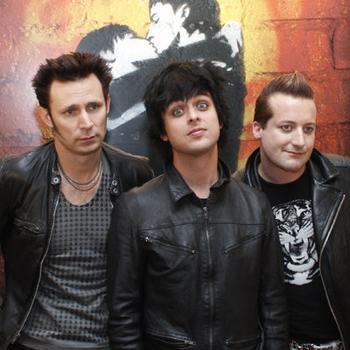 "Don't wanna be an American idiot!"note The classic lineup. From left to right: Mike Dirnt, Billie Joe Armstrong and Tré Cool.
"Do you have the time
To listen to me whine
About nothing and everything all at once?"
—"Basket Case"
Influences:
Advertisement:

Green Day is an American Pop Punk/Alternative Rock band from the Bay Area (Oakland, to be precise).

Around 1987, Billie Joe Armstrong (lead vocals/guitar) and Mike Dirnt (bass) formed the band Sweet Children; in 1988, John Kiffmeyer (Al Sobrante) joined as the drummer. Before releasing their first LP, 1990's 39/Smooth, the band changed its name to Green Day, supposedly as an inside joke about marijuananote A "green day" is a day spent smoking marijuana and doing nothing else. In 1990, Kiffmeyer left the band to attend college and Tré Cool joined in his place, completing the Green Day lineup we know today.

Green Day reached its first breakout success with 1994's Dookie, still seen as one of the most seminal albums of its time for its lasting impact on punk rock and its mainstream acceptance. It remains their highest-selling album.

From then on, the band would continuously slide between cynical and optimistic tones in their songwriting and concepts, often transparently informed by the political tensions of the times, and experiment with different genres, both in their work and their handful of short-lived side projects, including The Network (New Wave, under pseudonyms) and Foxboro Hot Tubs (Garage Rock).

The band has their own Rock Band game treatment, released in June 2010, and were inducted by Fall Out Boy frontman Patrick Stump into the Rock and Roll Hall of Fame in 2015.

Nobody likes you,
Everyone left you,
They're all out without you,
Having fun.