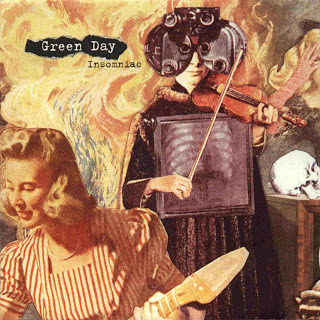 My mind is set on overdrive
The clock is laughing in my face
A crooked spine, my senses dulled
Past the point of delirium
Advertisement:

Insomniac is the fourth album released by American punk rock band Green Day, released in October 1995 as their first after their breakout success with Dookie.

The album's cover art came from collage artist Winston Smith, who was asked by band frontman Billie Joe Armstrong how he could make such intricate pieces of art in such short times. Smith replied, "It's easy for me. I am an insomniac." Armstrong himself has stated the album's name came from his own insomnia, which was often induced by being woken up during the night from his at-the-time 8-month-old son screaming.

One of the album's most defining features is its Darker and Edgier tone. The music has a far more abrasive and aggressive sound, while the lyrics are much bleaker and grimmer. Due to this, Armstrong knew that the album wasn't going to have the same explosive success as Dookie, and his predictions were proven true as Insomniac failed to have enough sales endurance to surpass or even level Dookie. Critics were generally positive towards the album, while some were more lenient than others about nitpicking about the band's lack of notable progression.

Despite the album's general disappointment compared to Dookie, it did bring us one of the band's most popular 90s songs: "Brain Stew".