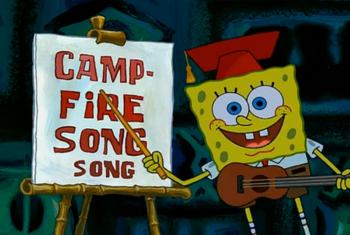 It'll help if you just sing along!
Advertisement:

A music trope, where a band or singer names one of their songs "The (Something) Song". Normally used light-heartedly, usually because the word that the song title references comes up in the lyrics a lot. Also used occasionally in musical theatre. The Japanese equivalent is "(something) no uta". At times, it will be employed in brackets after an alternate title.

Can sometimes be a form of Heavy Meta.

SpongeBob leads Patrick and Squidward in singing his C-A-M-P-F-I-R-E-S-O-N-G Song.

SpongeBob leads Patrick and Squidward in singing his C-A-M-P-F-I-R-E-S-O-N-G Song.