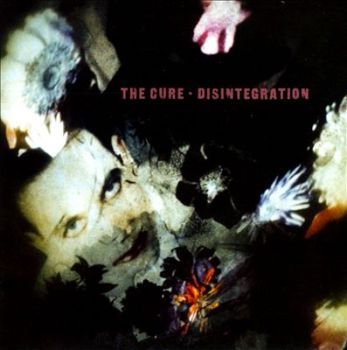 Whenever I'm alone
You make me feel as if I am whole again
Disintegration is the best album ever!
— Kyle Broflovski in the South Park episode "Mecha-Streisand"
When I'm walking off and Stan's saying: "Disintegration is the best album ever," it's one of my greatest moments in life.
— Robert Smith, misattributing the quote while reflecting on that South Park episode in an interview

Disintegration is the eighth studio album by The Cure, released in 1989.

The title was aptly chosen as around the time of its creation, longtime member Lol Tolhurst was thrown out of the band because of his alcoholism problem, and because the others felt he was becoming an albatross around their neck. He officially left after a verbal fight, and although he actually had very little to do with the recording of Disintegration, he was still credited in the liner notes.

Frontman Robert Smith was also suffering from depression at the time over their commercial success with more accessible songs over the previous two albums and the fact that he, at age 29, believed that he still hadn't made a Cure record that could be considered their masterpiece. To attempt to remedy this, they returned to their roots and made a gloomy album in the Goth Rock style they originated in. Still, it remained a Troubled Production, with producers fearing that it would flop, Smith deciding not to talk to any of the other band members for a prolonged period, and a house fire almost stopping the record from ever being completed.

Despite all odds, it was a massive success. "Lullaby," "Fascination Street," "Pictures of You," and "Lovesong" became big international hits.

The Same Deep Troper as You:

I'M GONNA DISINTEGRATE YOU!
(da-dink!) Playing "Disintegration" by The Cure.