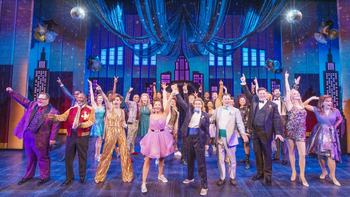 It's time to dance!
Advertisement:

The Prom is a musical comedy based on an original concept by Jack Viertel, with music by Matthew Sklar, lyrics by Chad Beguelin, and a book by Beguelin and Bob Martin. The show is directed and choreographed by Casey Nicholaw. The Prom had its world premiere in Atlanta, Georgia in 2016 and had its first Broadway preview October 23, 2018, officially opening on November 15. It closed nine months later but will begin a national tour in 2021.

The story revolves around 17-year-old lesbian Emma, who becomes a headline when the PTA of her Indiana high school cancels the prom rather than let her attend with her girlfriend. In New York, four veteran Broadway actors in need of good publicity hear of this and decide to go to Indiana to fix this injustice. Shenanigans inevitably ensue.

The Prom itself made both headlines and history shortly after its opening, when its performance at the 2018 Macy's Thanksgiving Day Parade included the first broadcast same-sex kiss in the parade's 92-year history.

A novelization was released in September 2019. A film adaptation by Ryan Murphy (Glee) was given a limited theatrical release on December 4, 2020 with a worldwide Netflix debut on December 11. The film's cast includes Meryl Streep, James Corden, Andrew Rannells, Nicole Kidman, Keegan-Michael Key and Kerry Washington with Ariana DeBose as Alyssa and newcomer Jo Ellen Pellman as Emma.

The stage musical
The film adaptation
"Is this what not failing feels like?"
"Yeah, I think it is. Pretty good, huh?"
Feedback

You Happened (The Prom)

Emma and Alyssa celebrate the prom getting back on and prepare to come out publicly.

You Happened (The Prom)

Emma and Alyssa celebrate the prom getting back on and prepare to come out publicly.