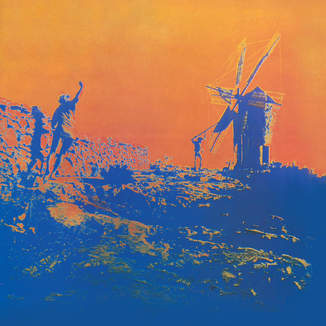 Lovely, señorita...
"A butterfly with broken wings is falling by your side
The ravens all are closing in, there’s nowhere you can hide
Your manager and agent are both busy on the phone
Selling coloured photographs to magazines back home

More is the third studio album by Pink Floyd, released in 1969. It is their first full-length soundtrack, for the film of the same name. It is also their first full album without Syd Barrett, and along with A Momentary Lapse of Reason and The Endless River, their only album with David Gilmour on all the lead vocals. Though the film is rather obscure in the English-speaking world, several songs, including "Green is the Colour" and "Cymbaline", remained staples of the band's live sets through the early '70s.

Preceded by A Saucerful of Secrets. Proceeded by Ummagumma.