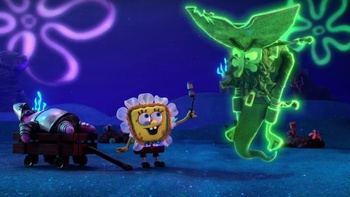 Terror all around you, and we've just begun
You'll be trembling helpless lumps of fear when we are done
Grim unearthly creatures flaunting nauseating features make for ghastly midnight screechers,
You'll be speechless but for AAAAAAAAAHH!!!
—"The Scare Song"
Advertisement:

The Legend of Boo-Kini Bottom is the second Halloween Episode from Nickelodeon's SpongeBob SquarePants and the show's second stop-motion holiday special after Its A Sponge Bob Christmas.

It's Halloween night, and Patrick helps SpongeBob overcome his fear of the holiday by convincing him that "scary equals funny". SpongeBob ends up having a laugh riot on Halloween night, which attracts the attention of the Flying Dutchman. Finding the scares provided in Bikini Bottom lackluster, the Dutchman decides to show SpongeBob and Patrick how truly frightening Halloween can be.

"The Legend of Boo-Kini Bottom" contains examples of: