Music / System of a Down 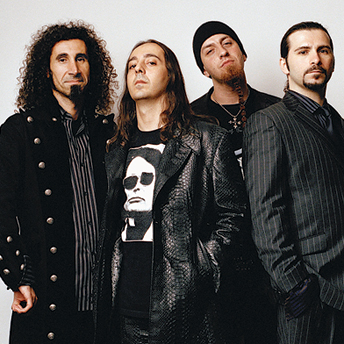 System of a Down is an Armenian-American rock group consisting of lead singer/keyboardist Serj Tankian, backup vocalist/guitarist Daron Malakian, bassist Shavo Odadjian, & drummer John Dolmayan, formerly drummer/one-time vocalist Ontronik Khachaturian. The name ultimately derives from a poem written by Daron titled "Victims of the Down." They changed the name to "System of a Down" so that their CD's could be shelved closer to their musical idols, Slayer. In their early years, they were (more or less incorrectly) labeled Nu Metal. This gradually subsided once the band gained further respect among both metal fans and the more critical segment of the mainstream. With that said, their sound isn't genre-definable but they sound similar to metal, alternative, & progressive. In general, most of their work fits well enough under the general label of "rock" music.

After the success of their fourth and fifth albums, Mezmerize/Hypnotize, in 2006 they parted ways to work on various non-SOAD projects (Tankian's solo effort, Scars On Broadway formed by Malakian and Dolmayan, and Odajian's work with RZA). All of them except Malakian claimed this was an indefinite hiatus, but a lot of fans assumed it was more of a break-up, until they reunited for a tour in 2011. The band have continued to tour since, and they announced to the 'Kerrang!' magazine that they'll release a new album in 2017, though this would not come to pass due to Creative Differences and Serj refusing to release anything that he felt was less than the band's absolute best.

In 2020, the band released their first new songs in over 15 years

, "Protect the Land" and "Genocidal Humanoidz." The songs were released to raise awareness of the war being perpetrated by Turkey and Azerbaijan and the war crimes committed within Artsakh against the ethnic Armenian population.

Their lyrics often revolve around themes of isolation, insanity, and criticisms of modern society. Some of their songs have absurdist lyrics, others are sung as if speaking directly to the listener and feature terse statements and lots of questions/demands, and others yet are more sarcastic and satirical. Probably their most well-known attribute is their rapid tone/tempo/time signature changes, giving the music a schizophrenic feel (most noticeable in songs like "Question!," "I-E-A-I-A-I-O," "B.Y.O.B.," and, of course, "Chop Suey!").

They have been vocal in spreading word about the early-20th-century Armenian genocide, up to and including a tour to commemorate its 100th anniversary (though "P.L.U.C.K." and "Holy Mountains" are their only songs specifically about the tragedy itself). They are also in favor of drug decriminalization & are strongly anti-interventionist.

Tropes found in their music: