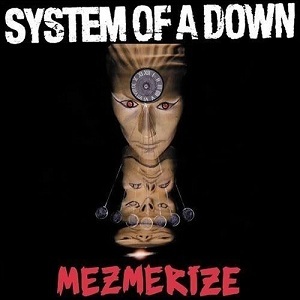 Why don't presidents fight the war?
Why do they always send the poor? 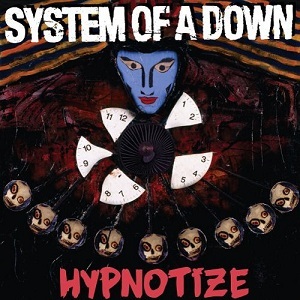 They disguise it, hypnotize it
Television made you buy it
Advertisement:

Mezmerize and Hypnotize are the fourth and fifth albums by System of a Down, respectively. Released months apart in 2005, both debuted at No. 1 on the Billboard 200, and enjoyed extensive mainstream success thanks to the singles "B.Y.O.B."note stands for "Bring Your Own Bombs", "Question!", "Hypnotize", and "Lonely Day". Originally intended as a double album, the records were split to reflect the band's choice to let their audience absorb each individual track rather than giving unfair attention toward the hits.

The album focuses on more alternative elements than their previous Progressive Metal albums, such as soaring acoustics, string sections, and more direct lyrics. In particular, the songs focus more on Lighter and Softer bits with Epic Riffs laden throughout, such as on the non-singles "Radio/Video", "Sad Statue", "Lost in Hollywood", "Holy Mountains", and "Soldier Side". In other songs such as "Stealing Society" and "U-Fig", the album has a more experimental aesthetic than before, especially since they straddle Metal Screams with minimalist guitar pieces.

Guitarist Daron Malakian was the leading creative force on this album and co-produced it along with Rick Rubin. This led to some tension within the band, especially since vocalist Serj Tankian, who had previously composed most of the songs, decided to focus more on his solo career during the production and recording. The band has not released an album since, mainly due to Serj's reluctance to overcompensate and to put out something poor in quality, since it is regarded as a Tough Act to Follow. However, after an extended hiatus, the members have still continued to perform together live since 2009, and each band member has had successful solo careers.

Notably, "B.Y.O.B." won a Grammy Award in 2006 for Best Hard Rock Performance, and remains their only Top 40 hit to this day.

Welcome to the troper side... there is no one here but me...