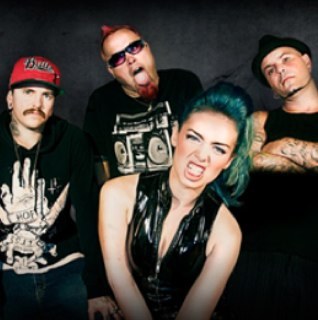 Sumo Cyco have their origins in the solo career of their lead singer. In 2008, Skye Sweetnam found herself at a crossroads: her first two albums (2004's Noise From The Basement and 2007's Sound Soldier), which were very pop-oriented, hadn't exactly set the world on fire in terms of sales figures. Also, she had just turned twenty, and therefore, could no longer refer to herself as a teen pop singer. As she tried to figure out what she was going to do next, she got to work on writing songs with her longtime writing partner Matt Drake, presumably for a third Skye Sweetnam solo album.

As more and more songs were written, both Sweetnam and Drake realized that Skye Sweetnam's lyrics had begun taking a darker turn. With this, an idea sprung forth: rather than put these songs on a third Skye Sweetnam album, Skye decided that the best way to bring these songs to life was with the help of a band. That way, she could go down a new career path without letting her past get in the way. The idea of an alter ego also was hatched around this time. It didn't take long for Skye to figure out who would be a part of her new band project. Drake joined almost immediately, and soon, Skye and Matt's friends, Ken Thor Corke and Ryan Kerry Leger, rounded out the group. After some brainstorming (or rather, just going to a band name generator website and seeing what results, then combining two of the names that they liked, one of which was spelled differently originally), the four settled upon the name Sumo Cyco.

Sumo Cyco's first ever release was a free download of their song "Limp" on March 11, 2011. Since then, the band has put seven songs up for sale on iTunes and other online music stores, with the idea of a full-length album release continually being tossed around by them. A music video has been made for each song released thus far, every single one of them made by the band themselves on a shoestring budget (with a little help from their friends).

The band got a huge boost in popularity and some much needed publicity in the fall of 2011 when a video of Sever getting hit in the face with a moving ceiling fan during the making of the music video for their song "Interceptor" was posted on YouTube by the band and ended up going viral, appearing on Ray William Johnson's =3 YouTube series and the TV shows Attack of the Show!, Tosh.0 and Ridiculousness. Thanks to the band wisely putting a link to the "Interceptor" music video at the end of the ceiling fan video, many of the people who saw "The Ceiling Fan Incident" ended up checking out the "Interceptor" music video, and as a result, Sumo Cyco's fanbase saw a dramatic increase in its numbers in a matter of weeks. Even over a year after it was first uploaded, "The Ceiling Fan Incident" continues getting hits, therefore, more people are discovering Sumo Cyco and becoming fans of them on a consistent basis.

Since they started releasing music, Sumo Cyco have opened up for the bands Hollywood Undead (this was their first ever live concert as Sumo Cyco, in fact) and Finger Eleven, and have played at NXNE (the popular Canadian equivalent of the also popular American SXSW festival), the annual S.C.E.N.E. Music Festival and on the Toronto stop of the Vans Warped Tour 2012. This is all the more impressive when you realize that Sumo Cyco have yet to be signed to any record label, major OR independent. They wouldn't mind changing that last part one of these days, of course, but the band *does* take pride in being self-sufficient. They, without a doubt, believe in a D.I.Y. mentality.

Singles Released As Of This Writing