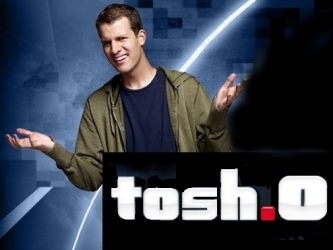 "We are so much more than a clip show."
Advertisement:

Tosh.0 was an American television show that starred comedian Daniel Tosh and ran on Comedy Central. The show is a clip show in the style of The Soup that focuses on the internet. The show was originally scheduled to air for a season of ten episodes, but it became unexpectedly popular (alongside being cheap to make), causing Comedy Central to greenlight more episodes. The show aired for a total of twelve seasons.

The first part consists of Daniel showing a string of videos (and occasionally images) found on the internet with humorous commentary about each one. Usually he'll pick one picture or video from the bunch and "put 20 seconds on the clock" note Though, as Daniel himself has pointed out, the time is usually nowhere near 20 seconds. "It ends when I'm out of jokes." and see how many funny comments he can make in that time. Daniel ends the segment by looking at the last clip more closely in the "Video Breakdown", where he pauses the clip while showing it and shows parts in slow motion to dissect it and give himself time to make more quips.

The second part of the show (and probably its most unique aspect) usually consists of a "Web Redemption", in which a person who has embarrassed themself in an online video is brought on the show and given a chance to "redeem" themselves. The segment usually starts with an interview in which Daniel asks his guest about the background of the video in question, usually followed by some sort of training, then finally, the redemption itself. If the person was trying to do something and failed in their attempt, their redemption will usually be for them to try again and succeed. They have done some variations on this segment, such as a "Web Investigation" where they find if a video was faked.

The third part of the show is more variable in what it features. Originally, Daniel would feature an original celebrity video during this part, though he has, as of late, used the part to interview internet celebrities or just show more videos, with longer commentary on each one. There are some recurring segments that also show up in this part of the show, including "Is it Racist?" and "Guess What Happens Next", both of which are pretty self-explanatory. The Viewer Video of the Week is also usually shown during this part, before the commercial break. It's not uncommon for Daniel to also use the fourth segment to show a longer video with more commentary than usual.

The fourth and final segment was once not very significant but now frequently features the show's fans in some way, either through their tweets or through videos they send in. These segments usually begin with Daniel describing the theme of the segment and what he did to get the fans to send in their tweets or videos, followed by showing the tweets/videos themselves. Whenever possible, the tweets/videos usually insult Daniel in some way; frequent targets include his sexuality, the perceived lack of humor in his show, and his mother.